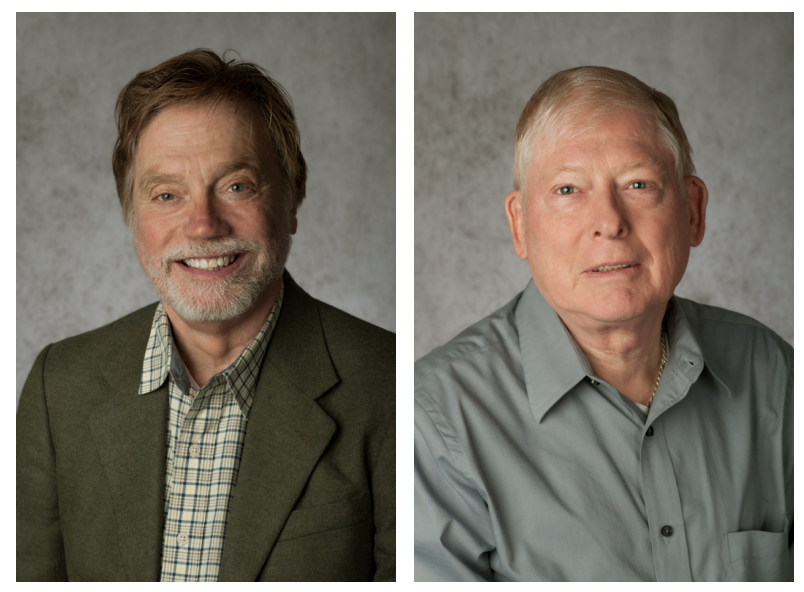 In December, Scott Rice said farewell and happy retirement to Jim Jenkins & David Dieckman. Both had been with Scott Rice for over 25 years.  We are lucky to have worked with such amazing people and wish them well in their retirement!

To show our appreciation to both of these men & their years at Scott Rice, we named our library and “fireplace room” in the office the Dieckman Den, and will be installing a flag pole in honor of Jim and his service, in the front of the office. 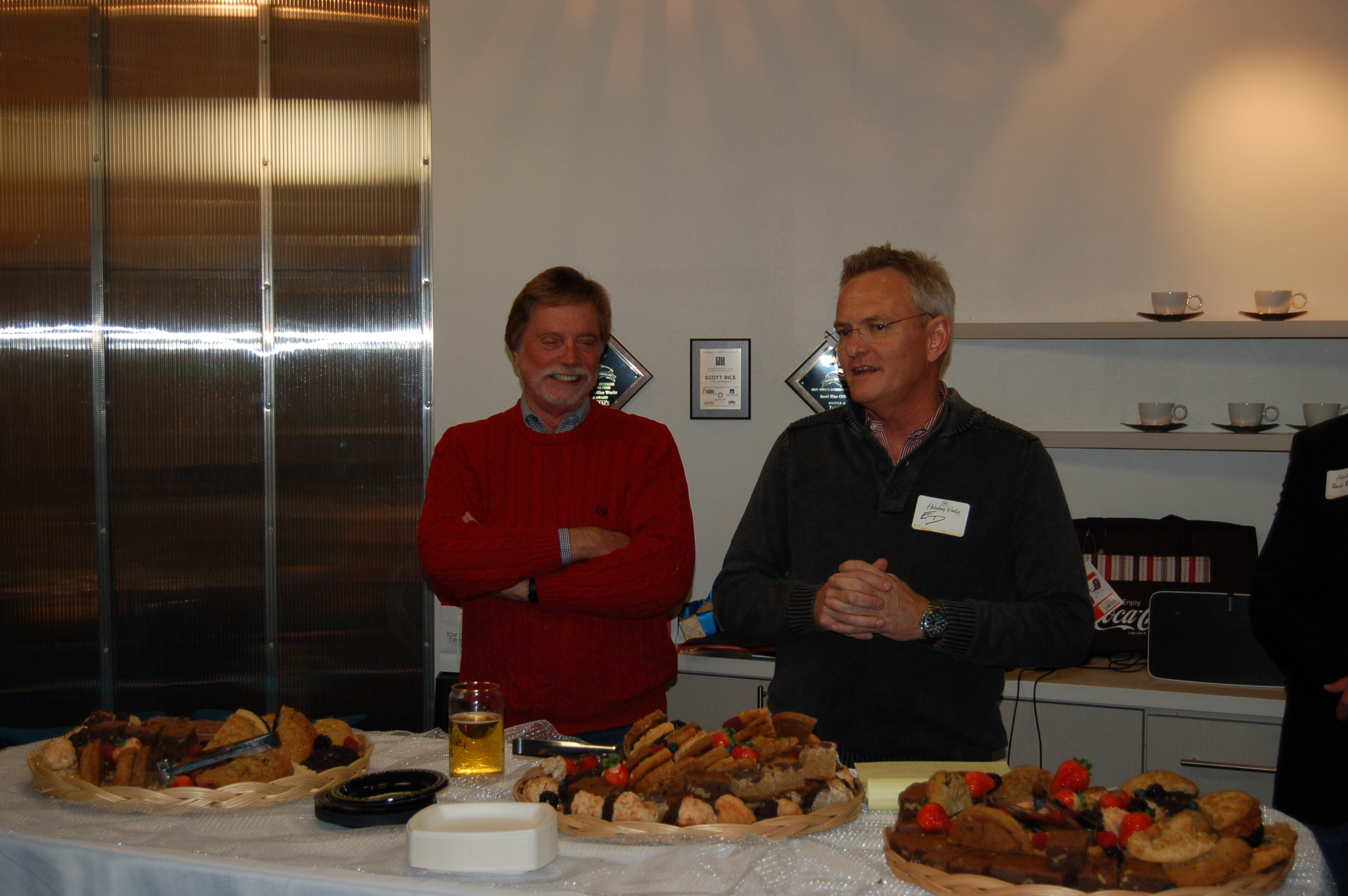 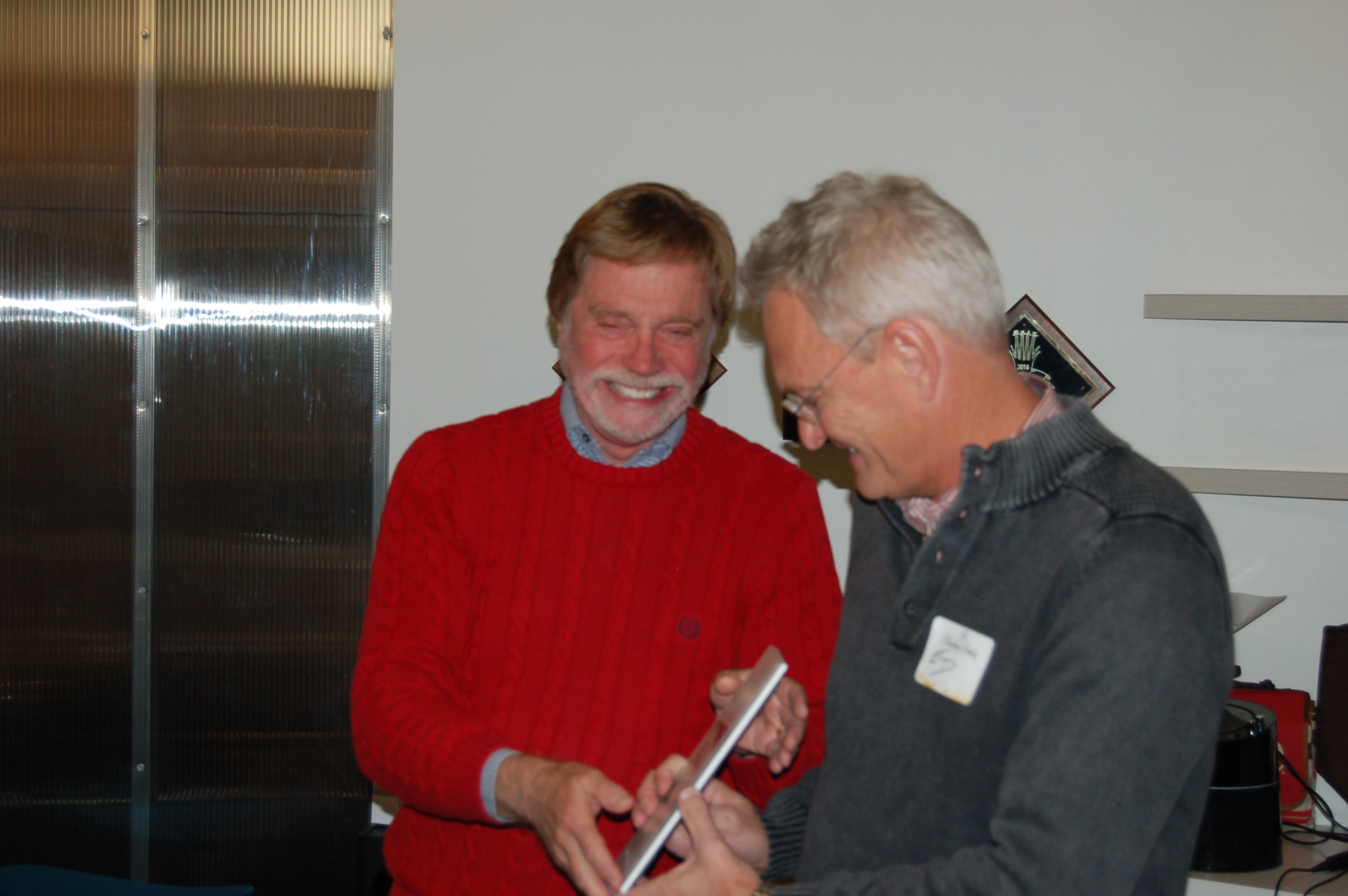 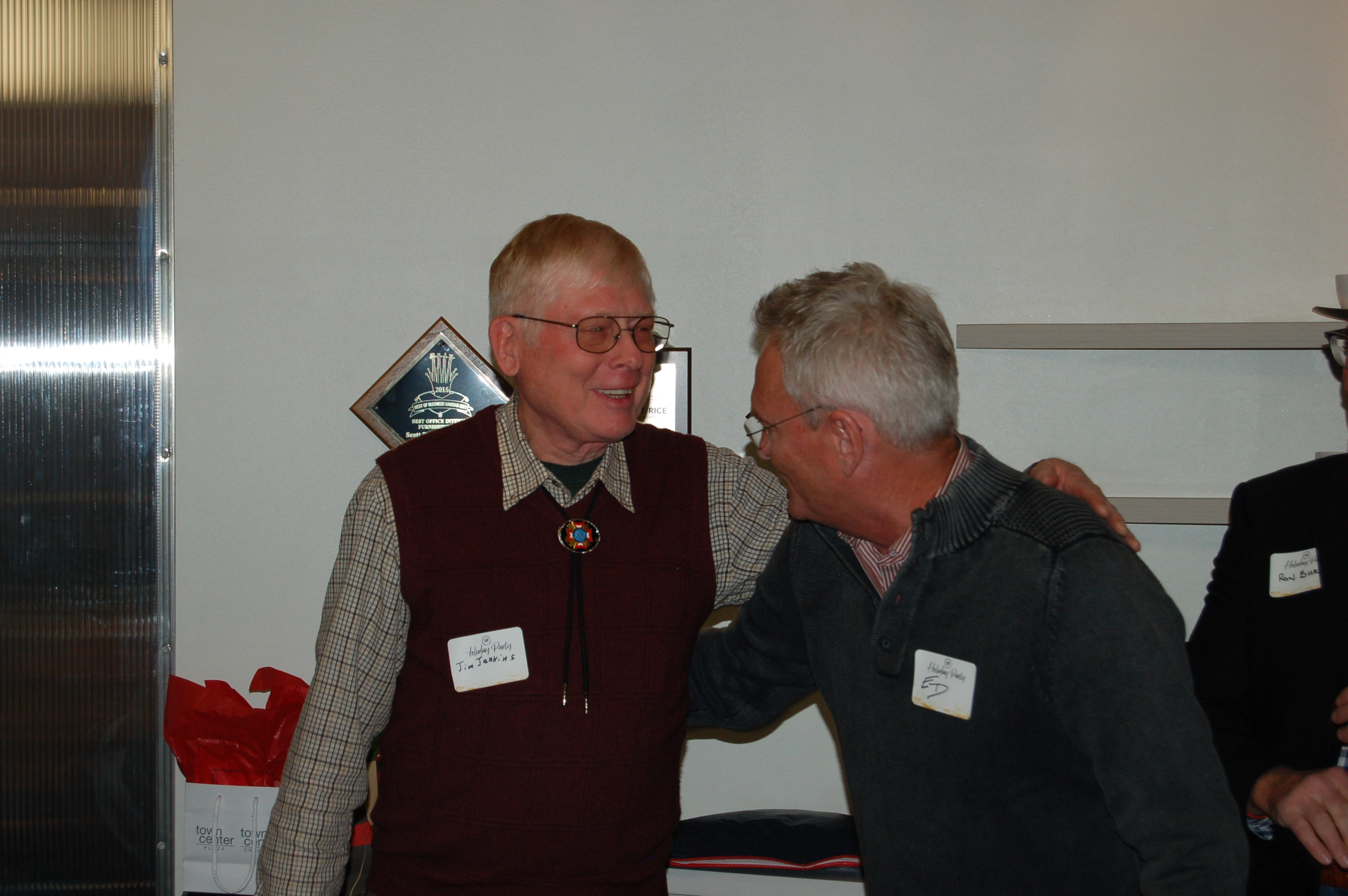 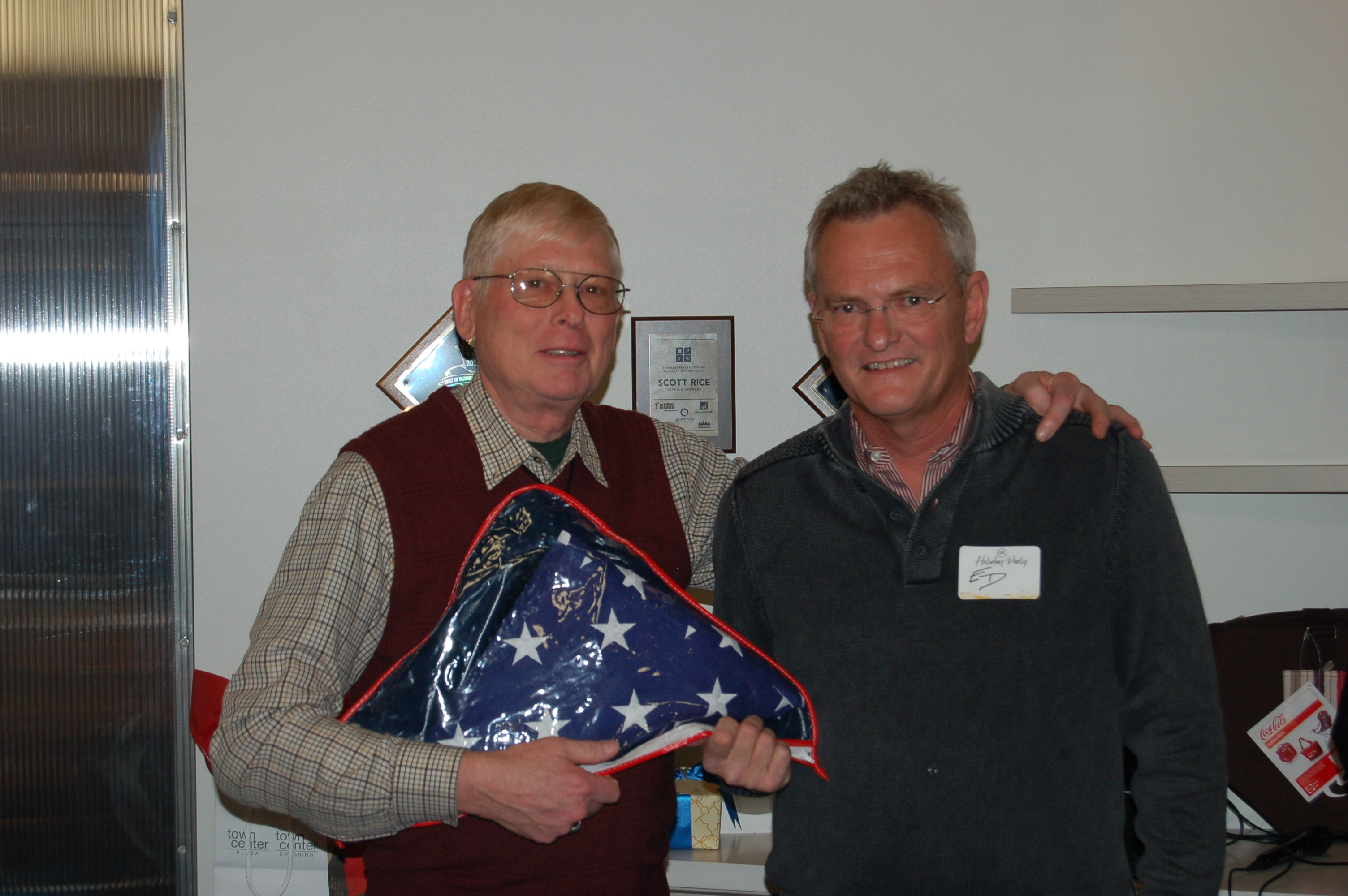 Both David and Jim had a few words to share with us about working at Scott Rice.

David Dieckman:  Certainly the highlight of my tenure at Scott Rice was being part of our unprecedented Independent Research and Fact-Finding that led to the eventual reality of our wonderful facility!    At the time of its opening in 2001, our original “Knowledge Center” was unlike anything in the region with few facilities anything like it in the country!  To this day, our Work/Life Center continues to be unsurpassed …serving as an educational element to the utilization of Furniture (and Space) in support of PEOPLE striving to meet organizational objectives.    Likewise, throughout my professional career at Scott Rice, I was fortunate in that I was given the opportunity to go out and promote our philosophies regarding Strategic Visioning, Furniture and the Utilization of Space to numerous Professional Organizations, the Regional A&D Community as well as Students of Interior Design and Architecture.

Needless to say and thanks to forward-thinking leadership, I have had a most fulfilling and rewarding experience at Scott Rice.

Jim Jenkins:  I am parting with mixed feelings.   Amazed I made it to this point in my life for what we all plan to achieve one day!   Yet leaving what has been my lively hood for most of my life.   Leaving the environment of those I have become close friends with (like a family) and the daily routine of working at Scott Rice.   Just think that 1/3 of my time has been spent commuting to and from and daily duties at Scott Rice.  When you account for hours sleeping, the percentage of time is even higher!    I have a total of approximately 42 years (3 + 39 years with Scott Rice – 1972-1975 and 1978-2017).

I have been involved in wearing many different hats over the years:   From being helper on delivery truck, driver, Lead Installer, serviceman, Scheduling Deliveries, Warehouse supervisor,  Inventory Control, Invoicing, supervisor of account coordinators, accounts receivable, HR contact, trainer and many other miscellaneous tasks.

I will not disappear completely,  I will stop in from time to time to say hi, especially when I find my car got locked into auto-pilot and took me back to Scott Rice (my long time Home away from Home)!

1969 Livingston Oil Company purchased Bauman Bus Interiors and Data Essentials in KC and named it Scott Rice.  There eventually was Scott Rice in St Louis, Dallas, KC, Wichita, Denver, 2 in OK and Lincoln (maybe one other?)

1972 Summer I started working for Scott Rice as part time help/driver.  Later that summer I was hired full time.

Showroom was at 2940 Main St.   Warehouse was at 1931 Harrison.   We recieved shipments via railcar.  The building was a small 2 story with basement warehouse with an elevator.  At that time we stocked what we mainly sold, files, bookcases, desks, tables and chairs.   No system furniture at this time.   Each floor was so packed that if item one needed, would have to crawl over top, hoist item up and pull over tops of other product to elevator.   At this time the supply side and offices were located in caves on 31st St.

Later in 1972 we moved warehouse to caves on 31st Street.

Around 1974-75 is when we began to see/sell system furniture.

1978 May – I came back to Scott Rice, our warehouse was still in the warehouse but in different location.  We delivered product in the day and all met at job site and installed at night and on the weekends.

1988 we began to transition to new Hedberg system which was dos based system.  Prior to this we used 7 part carbon copies.  Page for customer quote, PO to vendor, receiving document, vendor verification, delivery paperwork, invoice and maybe sales copy.

I started scheduling Deliveries in 1989 and still helped deliver product when needed.

Scott Rice had south locations on College (west of Metcalf and east of Antioch) and at Metcalf and College.    Then we started the SR Express Store and 89th and Quivira with Doug Will as the manager.

In 1997 I took over Inventory Control.   Several locations and showrooms.   We acquired Strong’s in Lawrence somewhere around 1995.

1998 – I began spending half days in office doing all the invoicing as well as inventory control and Account Receivable.

2000 – moved into present showroom and maintaining showroom at 1020 E 8th St with admin offices still at that location.

2003-  Color Art purchased the Trade Name Scott Rice but not the company, acquired lease of 14720 W 105th Street and product at that location.   All past un-delivery un-inv’d product was ours and vendors invoices relating to them.  All Receivables and all Vendor invoices related to them were Original Scott Rice.